This decision is much easier to make when you’re getting input from a trusted source. At CCCADA, we understand that the most important part of choosing a rehab center is finding the place that meets the individual’s every need. Call us today to speak directly with a trained addiction treatment specialist: (866) 781-3882.

The History of Heroin: What Is It? Where Does It Come From? How Is Addiction Treated?

Just reading the word “heroin” might raise your eyebrows.

As the United States continues fighting the opioid crisis, heroin continues to find its name in the headlines, usually with a dark cloud hovering above it.

Chances are you’ve heard of heroin. But do you know what it is, where it comes from, and how addiction to it is treated?

The Facts About Heroin

Heroin is typically known as a dangerous, addictive street drug. And while that is correct, there’s more to the story.

According to the National Institutes of Health (NIH), “Heroin is an opioid drug made from morphine, a natural substance taken from the seed pod of the various opium poppy plants grown in Southeast and Southwest Asia, Mexico, and Colombia.”

Morphine is a drug that is typically used to treat moderate to severe pain by changing the way the brain and nervous system respond to pain.

Heroin dates back to 1874, when an English chemist synthesized it from morphine. It was first produced commercially in 1898 by Bayer Pharmaceutical Co. Heroin was initially intended to be used as a substitute for morphine due to the latter being misused, but it was later determined that heroin was also addictive, and it was eventually deemed illegal in the United States.

Although heroin is illegal, it’s still misused here in the U.S., contributing to the nationwide opioid crisis.

Call now to be connected with one of
our compassionate treatment specialists.

Heroin is sometimes mixed with other drugs or substances such as sugar or powdered milk. In some cases, the person ingesting heroin may be unaware of how much of the actual drug is being taken in, raising the chances of an overdose.

On the streets, heroin may be referred to as Big H, Black Tar, Hell Dust, Horse, Smack, and Thunder.

Heroin is classified as a Schedule I substance, which means there is currently no accepted medical use, and the potential for misuse is high.

The opioid epidemic has come in three waves, with the first arriving in the 1990s with the increased prescribing of opioid painkillers. The second wave began in 2010 when the country began to see an increase in heroin-related overdose deaths. The third wave started in 2013 and involved increased overdose deaths from synthetic opioids, such as fentanyl.

How Is Heroin Misused, and What Are the Side Effects?

Heroin can be misused in many ways.

It is often misused because it creates a feeling of euphoria (well-being, elation, or great happiness).

Usually, heroin is snorted, injected, or smoked. It can also be mixed with other drugs, most notably crack cocaine, and the combination is called a “speedball.”

According to the NIH, ”Heroin enters the brain rapidly and binds to opioid receptors on cells located in many areas, especially those involved in feelings of pain and pleasure and in controlling heart rate, sleeping, and breathing.”

In addition to its euphoric effects, heroin may also cause:

In the long term, heroin can cause:

It is also possible to overdose on heroin, which can be extremely dangerous. If you fear you or someone you know may have overdosed on heroin, call 911 immediately.

We are here to help you through every aspect of recovery.
Let us call you to learn more about our treatment options.

Signs of a heroin overdose may include:

How Are Heroin Overdoses Treated?

Put simply, heroin overdoses are dangerous. Heroin can slow breathing and heart rate to the point where the person cannot survive without medical attention.

What’s known as naloxone (Narcan) is an opioid receptor counteracter that eliminates all signs of opioid intoxication to reverse an opioid overdose. The NIH says, “Naloxone can quickly restore normal breathing to a person if their breathing has slowed or stopped because of an opioid overdose. But, naloxone has no effect on someone who does not have opioids in their system, and it is not a treatment for opioid use disorder.”

Naloxone is usually administered as a nasal spray or injected into the skin, muscle, or veins.

Naloxone works by binding to opioid receptors, which prevents heroin from activating them.

If you believe you or someone you know has overdosed on heroin, call 911 immediately.

How Do I Know If I’m Addicted to Heroin?

Recognizing the signs of an addiction may be the first step on your road to recovery.

Signs of a heroin addiction include:

People who misuse or are addicted to heroin may also develop a tolerance to the drug, which usually leads them to increase the amount of heroin they ingest and to ingest it more frequently.

Withdrawal symptoms can begin just a few hours after the drug was last taken.

What Other Opioids Are Out There?

Heroin is far from the only opioid that can cause an addiction.

Other opioids include oxycodone (OxyContin), hydrocodone (Zohydro ER or, when mixed with acetaminophen, Vicodin), codeine, morphine, and fentanyl. These opioids are typically given under the supervision of medical professionals. When misused (without a prescription or taken at a dosage higher than prescribed), the risk of overdose increases.

MAT for Heroin and Opioid Addiction

MAT, also known as medication-assisted treatment, is the use of medications combined with behavioral therapies to treat substance use disorders.

According to the U.S. Food and Drug Administration (FDA), “There are three drugs approved by the FDA for the treatment of opioid dependence: buprenorphine, methadone, and naltrexone. All three of these treatments have been demonstrated to be safe and effective in combination with counseling and psychosocial support.”

MAT can also improve survival rates, keep people in treatment, decrease illegal opioid use, increase the ability to gain and maintain employment, and improve birth outcomes for women who have substance use disorders.

Unfortunately, there are many myths and misconceptions surrounding MAT.

The most common one is the belief that when someone is treated for an opioid addiction to a substance such as heroin, MAT is simply substituting one drug for another. This isn’t true. The dosage of medication used does not give the person a high, but rather it helps reduce opioid cravings and withdrawal symptoms, and can help heal the brain while working toward recovery.

Ready To Make A Change?

We can help you overcome addiction and get your life back.
Your calls are always free and 100% confidential. 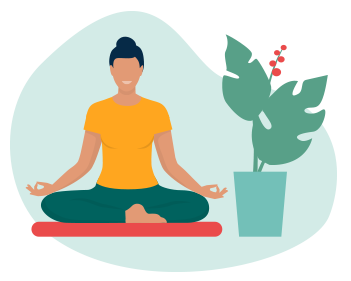 Here at Vertava Health, we understand heroin addiction can affect both the mind and the body. We offer a peaceful, serene setting that matches the comfort you deserve.

With us, you will learn to gain or rebuild your self-confidence and alter negative thoughts through psychosocial therapies like cognitive behavioral therapy, dialectical behavior therapy, and motivational interviewing. Learning how to deal with negative thoughts and behaviors can have a positive, lasting impact on you, your road to recovery, and relapse prevention.

If you need detox, we offer medically supervised services that will help you manage pain and withdrawal symptoms while also regulating breathing and heart functions. Medication is also available should you need it. Our medication-assisted treatment (MAT) is used in combination with behavioral therapies to give you a holistic healing experience.

Our alternative forms of evidence-based healing include what’s known as adventure and wilderness therapy. This form of therapy will teach you to survive and thrive in the wilderness. This not only builds your skill set but also helps build confidence that is crucial on your journey. Overall, this form of therapy is intended to give you access to fulfilling activities and work on your sense of self.

We Are Here to Help

If you or a loved one is struggling with a heroin addiction, we want you to know you’re not alone. We are here for you 24/7.

Here at Vertava Health, our goal is to help you take your life back. We apply personalized, evidence-based treatments at every level of care, and include digital health tools to improve clinical outcomes for those with substance use and mental health disorders.

To learn more about heroin addiction and the best treatment for you, call 615-208-2941. Calls are completely confidential.

Where does heroin come from in the U.S.?

Where does most heroin come from?

Heroin is an opioid drug made from morphine, a natural substance taken from the seed pod of the various opium poppy plants grown in Southeast and Southwest Asia, Mexico, and Colombia, meaning it comes from more than one part of the world.

{
“@context”: “https://schema.org”,
“@type”: “FAQPage”,
“mainEntity”: [{
“@type”: “Question”,
“name”: “Where does heroin come from in the U.S.?”,
“acceptedAnswer”: {
“@type”: “Answer”,
“text”: “While heroin can come from different areas around the world, heroin in the United States typically comes from one specific place. According to the U.S. Drug Enforcement Agency (DEA), “Heroin use and availability continue to increase in the United States. The occurrence of heroin mixed with fentanyl is also increasing. Mexico remains the primary source of heroin available in the United States according to all available sources of intelligence, including law enforcement investigations and scientific data.””
}
},{
“@type”: “Question”,
“name”: “Where does most heroin come from?”,
“acceptedAnswer”: {
“@type”: “Answer”,
“text”: “Heroin is an opioid drug made from morphine, a natural substance taken from the seed pod of the various opium poppy plants grown in Southeast and Southwest Asia, Mexico, and Colombia, meaning it comes from more than one part of the world.”>

The post Where Does Heroin Come From? appeared first on Vertava Health.