An evaluation and detox are usually the first steps in addiction treatment. Treatment specialists create a specific treatment plan based on the patient’s health, mental condition, and substance usage history during this stage. Call today to speak with an expert: (866) 781-3882.

I marched down this lonely and cold road with bloody, blistered feet. The gravel felt like knives puncturing them with every step I’d take. I hadn’t eaten in days but, my stomach didn’t even seem to notice. My eyes were dark and glazed with hammocks of blue resting under them. Desperation filled my heart and the need for more filled my aching bones. I looked at the street signs and all I could see written on them was “My Way.” This road I had been walking was the one that I chose. The thought of turning around wasn’t an option. The days began to blend together as I continued on this path, leaving no consideration for those I had left behind. I was gone and the person I had become; took over.

In the distance, I could see a sign, on each side, there were two arrows pointing left and then right. It was at a crossroads! Curiosity filled me as I grew eager to see what was written. I knew I was on “My Way”, a road that I had been walking for quite some time now and not one that I enjoyed.

As I approached the sign at the crossroad, I stopped to study its words. The arrow to the left read: Bitter Ends. I took a step forward to look down the road of Bitter Ends and found myself terrified. I saw the grim reaper up ahead with his hand out to me calling my name. I took another step closer, despite the fear. The dark swallowed the light as I heard his voice whisper, “Follow me! I hold all of your desires!” A twisting, gut-wrenching fear came over me as I could hear another voice shout out at me with a warning not to go. I took a few steps back and I couldn’t help but notice a graveyard not far behind. Over one million headstones lay ahead. Over half of the graves were full and the other half remained empty — awaiting many others that would follow. I slowly stepped back further until I found myself back at the sign. I looked up to see the other side of it and wondered where that road would lead me. The arrow leading to the right read: Recovery Rd. 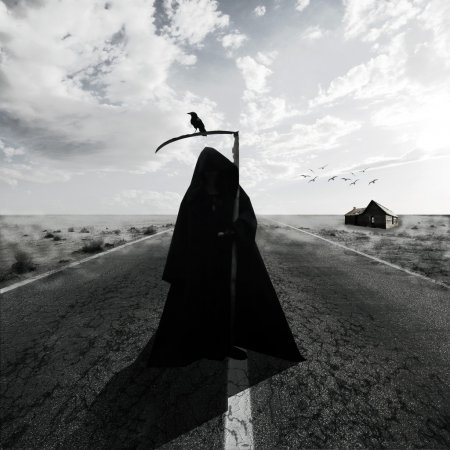 I took a few steps forward and with each step I took — the light swallowed the darkness. I turned around to notice that the grim reaper had turned around yet, I could still hear his whispers lingering in my head.

The fear I had felt had changed into fear of the unknown. I started to realize that “Bitter ends” led to death. But, where did Recovery Rd. lead?

The sun started to shine, and I realized that no matter how bad my feet were hurting; I had to stay on this path. The longer I walked, I started to see others walking too. Some were alone and some with another beside them. I was confused about where this path would lead yet, something in me knew that it had to be better than what I had just encountered.

The appearance’s of others looked weathered; like mine. Some were taking breaks at the rest stops that were paved for those who felt too weak to keep going. Voices shouted “Don’t give up!” out at those who decided to sit there. I continued walking, as I noticed a building that read “We Do Recover”. The same people on this path that I had seen were all lined up to get in. Others were walking back — too afraid of the unknown. I walked up to the building and noticed the first step that led into the building read: Surrender.

I took the step up and walked into a room to see smiling faces. Warm hugs were given and a pot of coffee was brewed. Food for those who were hungry rested out on a table. They all gathered in a circle and said a prayer they called, serenity. They went around in a circle to introduce themselves, all of them identified as addicts along with their names. Without a doubt, I knew I had made the right choice. I was in the right place.

Moral of this story?

My way doesn’t work in fact, my way almost killed me. I was left with a choice. I could go down a darker path to the bitter ends or I could choose recovery. I could choose a life worth living!

Today I am unafraid of what awaits me. I know that what is behind me isn’t worth turning back to see. I already know where that leads. Some come here and they say they are afraid, well, I’ve said that too. We all know what we get when we choose a life of drugs. We become physically, mentally, emotionally, and spiritually bankrupt. I know I was. But, what’s the worst that can happen? Freedom? Change? Growth? You could possibly love yourself and others? The only promise recovery gave to me was freedom. But, I got much more than that, and I am so grateful!

Someone once told me that “bottom” is where you stop digging. Me being the great digger that I was, always found ways to dig deeper to create different bottoms for myself. I don’t need to dig any deeper as I can listen to those who did just that. After realizing that I am not a gravedigger, I stopped digging my own grave.

Listening to the experience of others and the roads they walked – helped me to plant myself right where I am. There’s nothing out there for me but misery. So why even look back? I had to find a way that wasn’t mine. A way that would help me to stop making the same bad decisions that were leading me closer and closer to death. I had to surrender amongst many other things.

In order to receive real help, I had to be honest about my problem. I think this kind of honesty comes solely from myself first. If I don’t think I have a problem then, I also don’t believe I need help with it. Therefore, I’ll never get the help I need.

I had to become open-minded about the ideas of others who were on this road before me. Something I learned by reading and actually experiencing this was: You can not graft a new idea onto a closed mind. If I am closed-minded then I’m going to continue to think I know better and eventually become beaten. This I have done too many times to count! Once I learned the hard way, felt that beating, and ran myself into the same wall; I finally became willing to listen, apply and change.

This road isn’t easy, and it’s not for the faint of heart. In my experience, it’s more like ‘survival of the fittest’ only the strong survive! If you want to cut corners and take an elevator well, good luck with that! Elevators don’t exist here because there are only steps. If you don’t take the steps then you’ll find yourself stuck on your own road with your way in the way!

Before coming to recovery I created a lot of wreckage. There was so much to sort through and uncover and there’s still so much to learn. This can be painful at times. To have the belief that everything becomes butterflies and rainbows is an expectation that I had — which left me with nothing but disappointment.

As long as I stay clean and don’t pick up, just for today, no matter what, I will be okay. Recovery is beautiful & I am blessed to be on this road.

I am an addict named Mom, Thanks for letting me share!

The post The Road to Recovery Is Paved With Desperation first appeared on Addict Named Mom.

9 Tips for Staying Sober During the Holidays